Fred Somebody, Thomas Everybody, Susan Anybody and Joe Nobody were neighbors, but they were not like you and me.  There were odd people and most difficult to understand.  The way they lived was a shame.

All four belonged to the same church, but you would not have enjoyed worshipping with them.  EVERYBODY went fishing on Sunday or stayed home to visit with friends.  ANYBODY wanted to worship but was afraid SOMEBODY wouldn’t speak to her.  So guess who went to church … NOBODY.

Really, NOBODY was the only decent one of the four.  NOBODY did the visitation; NOBODY worked on the church building.  Once they needed a Sunday school teacher.  EVERYBODY thought ANYBODY would do it, and ANYBODY thought SOMEBODY would do it.  And you know who did it?  That’s exactly right … NOBODY!

It happened that a fifth neighbor (an unbeliever) moved into the area.  EVERYBODY thought SOMEBODY should try to win him for Christ.  ANYBODY could have made an effort.  You probably know who finally won him:  NOBODY!

This little parable brings to focus again the fact that each of us is personally responsible for God’s work.  If we leave it for somebody or everybody or anybody, nobody will do it.  Let’s work till Jesus comes!

Compliments of THE TRACT LEAGUE

In July, God’s love through the cross was shared by these CTW family members:

I want to share this update on ‘Uncle Don’, our most treasured member of the CTW family.  You’ll remember that I did a story on him before, when we met at the local grocery store (click HERE to read Don’s story).  Since then, he’s moved from Brainerd to Little Falls, MN, returning to his roots and closer to his son.

He calls us from time to time, usually about every other month.  We chat for a few minutes, catching up on what’s new … and, then, it’s down to business.  The purpose of his call is always the same.  He needs crosses!!!  You see, since we met Don in 2015, he has made it his personal mission to touch as many people’s hearts as he can while bringing them closer to God, one cross at a time.

About two weeks ago, Ernie and I trekked down to Little Falls with another stash of crosses.  Nothing special about our part of the visit … it was all about Don.  We just wanted to spend more time with him and experience the visual joy of how one person shares God’s love in such an unassuming way.

As Don simply tells it, he rides his motorized cart, fully equipped with His love (and our crosses), to the entrance of the Little Falls Care Center, (managed by St. Francis Health Service located in Morris, MN) every afternoon around 2 and sits at the front door for about an hour and a half.  During that time, no one can miss the dedicated ‘official greeter’ with his warm smile.  Pleasantly, he asks the gentle question, ‘Would you like a cross?’ and THAT’S when the magic begins to happen as the cross passes from the cart’s basket to the hands of the eager recipient.  You can almost feel the electricity of God’s love as it dances across that invisible string from Don’s hands to the waiting heart! 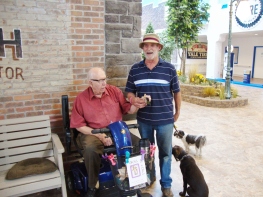 Don interacts with staff and residents as well as cheerfully greeting visitors, handing out crosses the entire time.  Sometimes, there’s a birthday party or family reunion and the crosses bless many lives; other times, there is only one or two visitors who stop by.  But, it doesn’t make any difference … Don is always there, and his mission is gratefully being fulfilled.

We continue to marvel at his dedication.  He says giving the crosses away is something to do and they give him a daily purpose at this stage of his life.  But, we know it’s more monumental than that.  We know that God has chosen Don to be His beacon so others will come to know, as Don does, that God does love them and that He is their only needed solace.  God has awarded Don this irresistible, wonderful gift and he glows because of it. 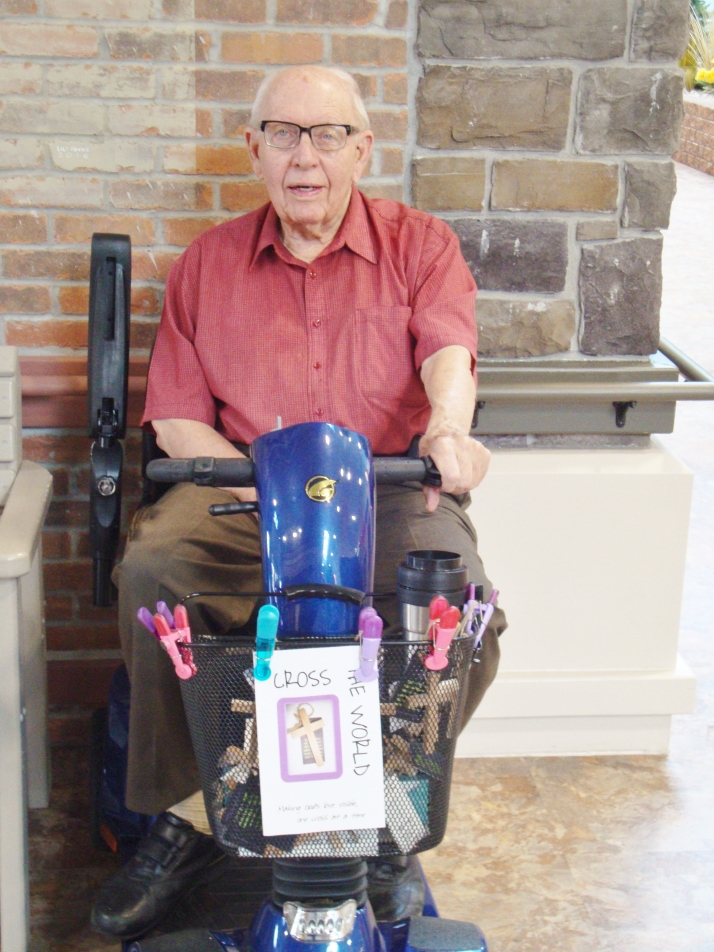 We are just as drawn to Don now as we were when we first met in that grocery store 2 years ago.  Since that time, he has personally handed out over 2500 crosses, just within the two assisted living campuses he’s lived in!  Wow!!  Should we all say it together:  ‘When we grow up, we want to be just like Don’.  Wouldn’t that be a wonderful world?!?!

May God continue to richly bless our ‘Uncle Don’! 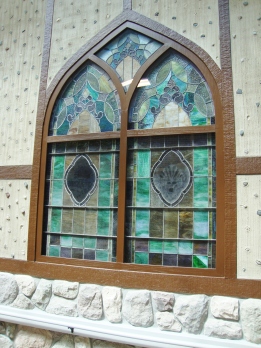 I am a little pencil in the hand of a writing God who is sending a love letter to the world.